This is an old revision of the document!

It allows manufacturers to control all electrical and electronical components of the leisure side of the vehicle through a single CAN Bus. Any component can be switched from anywhere on the bus system, and any measurement taken can be displayed or used anywhere on the bus.

What is a CAN Bus?

CAN (Control Area Network) technology was designed for the automotive industry in the 1990s. Nowadays, pretty much every new car has a CAN bus system that controls the engine, temperature, lights, indicators, etc. through a single bus system. They are very reliable (if electronics fail, it's usually not the bus itself, but individual components), and have been manufactured in the millions. That means the individual components are cheap, ubiquitous and reliable.

LeisureCAN is based on a peer-to-peer network. Every component connected to the bus is able to receive messages from any other component, and can send messages to all other components. The failure of a single component has no effect on the others, and there is no single point of failure.

The same set of lights can have multiple subscriptions, e.g. a panic switch next to the bed can turn the same lights on in blinking mode when operated.

Components can also react to measurements, e.g. if the inside temperature gets too low, the heating can turn on automatically. At the same time, a switch could turn on the heating overriding the temperature reading, etc.

To sum it up, it's up to each individual component to decide what it wants to do with the messages received from the bus. 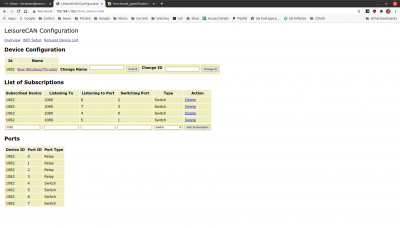 All this is freely configurable through a browser interface that can be accessed through WiFi; either as an ad-hoc access point, or bound into an existing WiFi network.

Security is provided through the WiFi networks own security, e.g. WEP password protection.

The main component is the bus itself, which consists of a 4 wire twisted pair shielded cable that runs along the length of the vehicle. The maximum bus length is 40 m, so the bus can easily be run along both sides, criss-cross, or in whatever layout is best. The bus cable is run through junction boxes into which the components are plugged. The cable, boxes and plugs are all IP68 compliant, e.g. the whole system is waterproof.

When the units are installed, the subscriptions can be set up, e.g. the user can configure freely how the components react to each other.

The huge advantage of a LeisureCAN system is that it's freely configurable, and the configuration can be changed at any time. If the user wants to add a new component (e.g. a new switch), he/she can just do that, and then configure which device reacts to the switch. In the same manner, a new device can be connected to the relay output of a LeisureCAN unit, and then be configured to be switched on by a set of events on the bus, e.g. a switch that's operated, …

Once the bus cable and a pair of power cables are fitted throughout the vehicle, new components can be added with a minimal amount of wiring required. Just hook up the new component to the power cable, and connect it to a relay output of the nearest LeisureCAN unit, and you are ready to go.

You could argue that a traditional copper cable wiring to each component is more reliable, but you have to take into account that you have a lot more connectors, cables, etc. running through your vehicle. All those provide additional points of failure.

I have been working in the car industry for over 2 decades, and when I started out in 1982, there were very little electronics in cars, especially the ones we mostly worked on. Electrical faults were rife, mostly contact problems, and they provided a constant source of annoyance for drivers.

Since the introduction of CAN bus systems in cars, the problems have shifted to individual components, which are now far more abundant. There are hundreds of sensors in a modern car, and huge amounts of actuators, valves, etc. that control the engine, brakes, steering, heating, air conditioning, etc. If we still had traditional cabling without a bus for those, we would see a lot more failures than we see with a neat central bus system that minimises cabling and connectors.

Except where otherwise noted, content on this wiki is licensed under the following license: CC Attribution-Share Alike 4.0 International